The size of a customer service department is, of course, directly related to the size of the business it is serving. A small company with only a limited number of customers will not have the same demands as a large one serving millions of people.

For the latter, it can become a costly operation to build and manage a customer service team to deal with thousands of customer calls every single day. Many, in fact, choose to cut corners by installing things like automated call answering instead. This is when customers will initially speak to a robot who encourages you to press numbers to determine the nature of your enquiry and provide you with an answer, or at least redirection to the correct department best equipped to deal with your request.

However, it shouldn’t come as much of a surprise that cutting corners and cutting costs is likely to also cut into your customer satisfaction in a big way. New research by alldayPA has found that over half of the people polled (55 per cent) would consider moving their custom elsewhere if a business treats their enquiries, complaints or troubleshooting requests with a robot rather than an actual human being. Even more – just over 70 per cent – said they would not choose a company if a human didn’t answer when they were shopping around.

From the one thousand people that were polled for the study, most people said that the automated answering service was at its most irritating when it was being used by professional services such as accountants and solicitors – companies where it is imperative that customers speak to human beings to discuss complex and often lengthy issues. The second most frustrating industry for customers to have to deal with automated machines is the travel businesses (travel agents, airlines, hotels, etc.)

So what should companies be doing? It’s simple, really: get rid of those automated systems and make sure you have actual people on hand to answer your customers queries. Even if they aren’t able to answer the queries immediately, just having a human voice instills a lot of confidence in the customer – 62 per cent of people say they would be happy to get transferred, receive a call-back later on or a reply by e-mail as long as they know their question is in the hands of a real person.

A board executive from alldayPA, David Joseph, explained why not using automated services might be more costly on paper but is far more financially beneficial as a long term solution. He said: “Automated call answering is often used by businesses in an attempt to save money, however such practices can often end up costing money in lost customers and sales.”

Take a look at this infographic for some more stats from AlldayPA. 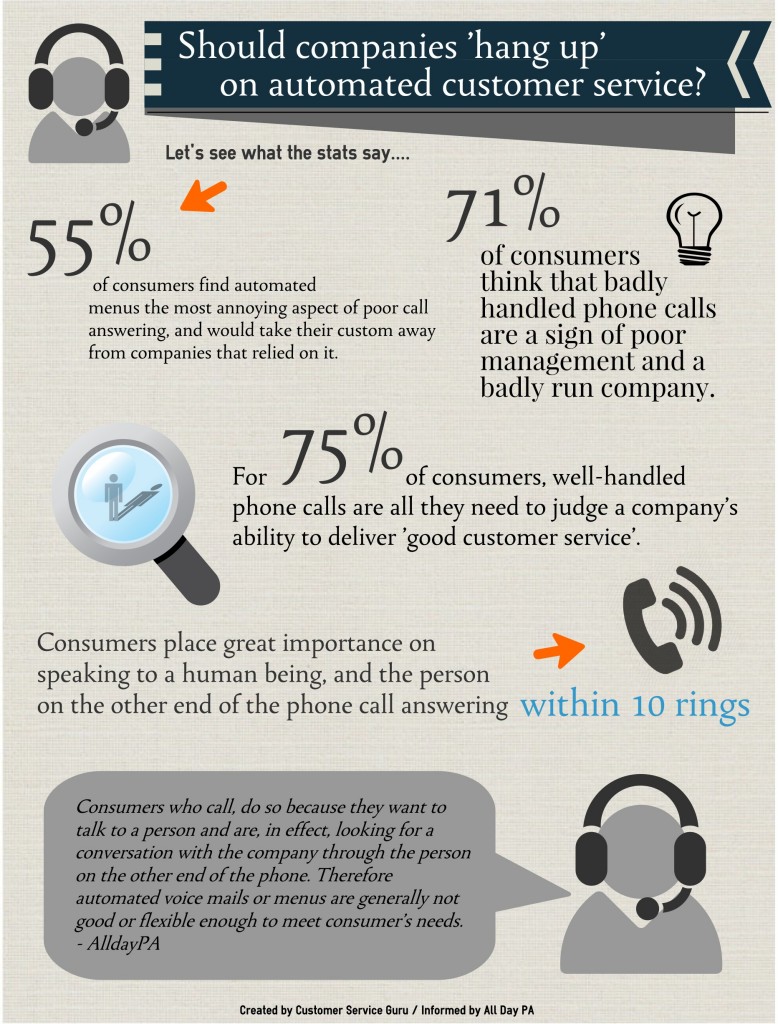 This article and infographic originally appeared at Customer Service Guru. It has been reposted with permission.