When The Customer Is Wrong – Should The Business Be Right?

In 1909 Harry Gordon Selfridge, the founder of Selfridge’s department store, is credited with saying, “The customer is always right”.

Through the years, a number of my colleagues and I have emphasized that the customer is not always right but they are always the customer.

I’ve come to believe that in order to be truly successful deploying a customer-experience strategy, you fundamentally have to believe:

With all that said, let me offer an example that tests all of these assumptions.

Imagine you are a restaurant owner and you have a customer complain about “hair in their food”. Further, let’s assume that the customer threatens to give you a scathing rating on social media unless you remove the charge for that particular meal. Let’s even assume, that you know that person wanting the free meal pulled hair from their own head and placed it in their meal after they consumed a sizable portion. What would you do?

This appears to have actually happened at a restaurant named Casa Nostra Ristorante. According to restaurant management, this is the review that was posted online: 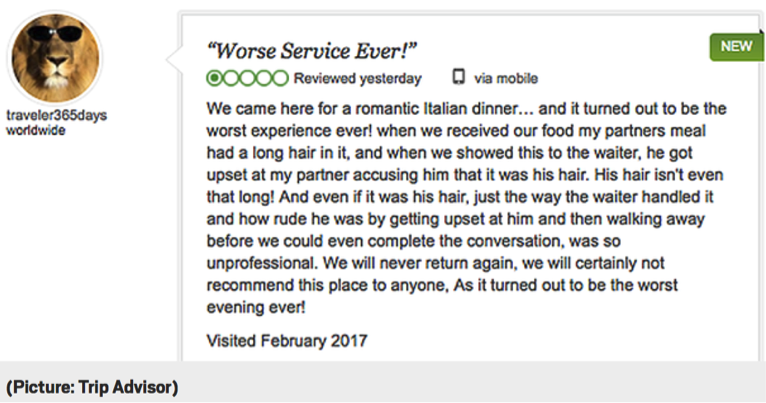 The review suggests a disgusting dining experience, doesn’t it? Now to the purported video proof of the actual “hair-raising” incident (complete with narration from the restaurant owners) from their Instagram account:

After seeing the video, the online review crumbles and looks like blackmail. Let’s think back to your response when this was posed as a hypothetical. Did you consider posting the closed circuit video on your Instagram account? What did you say you would do when I posed this hypothetically? What do you think about what these restauranteurs actually did?

While this situation will get a lot of media attention and the video will likely be a viral hit, even if I had seen the video of the woman putting hair in her food, I would have refunded the charges for her meal and averted any conflict in the restaurant for patrons who didn’t need to have their meals affected. I likely would have “left bad enough alone”.

These owners stood their ground on food charges and tried to take pre-emptive action against, the threatened “blackmail” review, by contacting travel sites and forwarding the video in hopes that the review would never get posted. Once posted they publicly chose to let their video evidence prove that they, the owners, were right. Ultimately the review was taken down and I applaud them for their efforts in that regard – because reputation matters.

While reasonable people can take very different courses of actions when these “extreme” customer situations occur, I’ll continue to champion the view that:

In general, customers are honest and fair.

Lifetime customer value is more important than any single transaction.

When people are occasionally dishonest or unfair, they should be managed with more dignity than they deserve.

I’d love to hear what you think…