In honor of Memorial Day and in celebration of all the veterans who have and continue to serve our country I’m reposting my account of running with Ernie Andrus, a World War II Navy Veteran. At that time Ernie was 92 years old and on a mission to raise money to bring the LST 325 back to Normandy. I joined Ernie for a portion of his coast-to-coast run a few months before he completed his journey and turned 93. (See full details in the original post.)

Ernie is now 95, and as of March 16th of this year, he started running the same course in reverse. He continues to raise money to bring the LST 325 back to Normandy (as his first run didn’t raise enough money, so he tries again).

The following was originally published on April 6, 2016.

Running with a 92 Year Old Man: Lessons in Living and Serving Fully

In 1998, I remember reading Tom Brokaw’s fascinating book The Greatest Generation.
Upon completion of that book, I walked away with a deeper appreciation for men like my father. They

From the little bit of information my father shared about the war, it appears that he lied about his age so he would be old enough to join the Army and he gorged on water to make weight requirements. After he enlisted, my father experienced combat that would leave shrapnel pressing dangerously close to his spine for the remainder of his life – the result of multiple purple heart awarded injuries sustained at locations like Anzio beachhead.

Upon his return, the demons of war haunted my father on occasion and he routinely demonstrated a hyper-startle response. Despite those after-effects, my father sought to leave the war well behind him and instead focus on the future and the family he created upon his return.

I was reminded of my father as I spent time recently with a contemporary of his. That man, Ernie Andrus, is truly 92 years young as I can attest by the 6.2 mile run we completed together. My run with Ernie was just a small section of his overall life “mission” – which, at present, includes a run from the west to east coast of America. Ernie’s epic journey began in San Diego, California back in October 2013 and is scheduled to be completed near Brunswick, Georgia in August of this year (one day after Ernie turns 93). 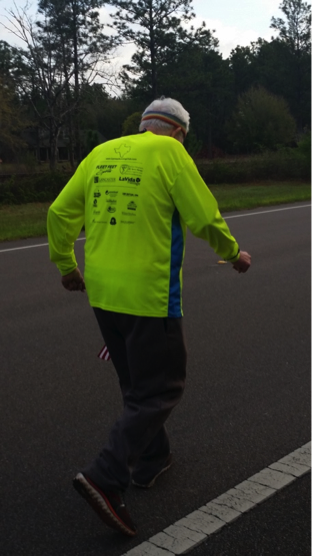 Ernie’s purpose, this run, “is being undertaken to raise money for the LST 325 SHIP MEMORIAL, INC. The LST 325 is a World War II-era naval landing ship used by the US Navy…One thousand fifty-one LSTs were built during World War II. The 325 is the only one left that has been restored and is still operational. Plans were being made to return the ship to Normandy for the D-Day Memorial Service (D-Day Plus 70, 2014) and beach it at the same location where it was on Omaha beach 70 years before. The cost of taking this ship across the Atlantic and back is tremendous. Shortage of finances caused the 2014 trip to be canceled. Perhaps we can raise enough money for D Day plus 75 in 2019.” 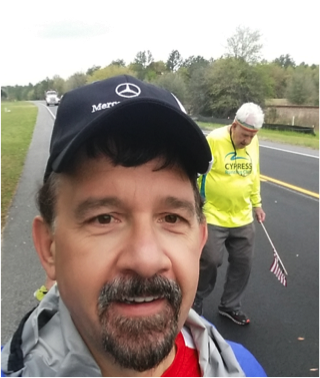 In his book Drive, Daniel Pink suggests that there are 3 key drivers for human motivation – purpose, autonomy, and mastery. Ernie runs because he has purpose. He controls his running schedule and allows fortunate people like me to run alongside to promote his cause and share his message which is fairly simple: “Freedom is not free. We must be willing and eager to serve; particularly, if we want to answer the call for our generation – just like those that have gone before.”

And Ernie runs to “master” each moment and each step along the journey. Ernie told me that some family members questioned whether he could complete such a monstrous goal but, “They reflected back on my life and knew if I could dream it, I could make it happen. Even my doctor said, “You could die running or die sitting on your couch. So run, Ernie.”

Ernie does run – about 19 miles a week (3 days a week approximately 6.2 miles a day). He told me he doubts his dream of having his ship make the trip back to Normandy beach will actually happen (donations are woefully below what it will take to fund that journey) but that he is grateful for the opportunity to raise money that will contribute to its long-term preservation. 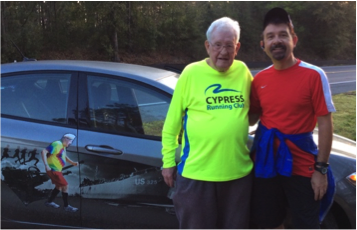 If you would like to learn more about Ernie or his LST 325 – please check out https://coast2coastruns.com/.

More importantly, if Ernie can run across America at the age of 92 fueled by purpose, mastery, and autonomy, what are you dreaming? And, what DREAM WILL YOU make a reality with the same fuel?